Justin Beiber and Katy Perry use it to share their daily lives to their combined 200 million followers. In the middle of the night President Trump uses it to slam the media and that becomes breaking news.

All eyes are on Twitter each day. And yet that attention is not translating into any sustained growth in Twitter’s user base.

In August, Twitter revealed it failed to add any new monthly active users during the June quarter. Worse still, its user base in the U.S. actually declined to 68 million from 70 million in the prior quarter. The news sent Twitter’s stock tumbling 13% in early trading Thursday and renewed concerns about whether Twitter has run out of room to grow.

Around same time, Facebook reported topping two billion monthly users in the second quarter, an increase of 294 million from a year earlier. Or to put that another way: In one year, Facebook added nearly as many users as Twitter has in total.

It is unfair to compare Twitter with Facebook or any other Social Media platform. Twitter was never meant to be a mass medium like Facebook. The fact that one needs to articulate the tweets to fit to 140 characters makes it appeal to a select niche and immediately cuts down a chunk of the masses. Founded in February 2006, as a system where you could send a text to one number and it would be broadcasted out to all of your friends. It was all about status, what you were doing at that time, or feeling. No other social network has built up quite the same kind of cultural currency—and for good reason. Unlike other networks, Twitter’s influence is decentralized; it lies in its power users, the ones who use it to give voice to people and movements that may not have risen otherwise.

Politicians, actors, musicians, sports stars, government agencies use Twitter primarily to spread their first voice. And they all have followers, millions of them, which means there are people out there, watching.

To stand out in the crowd and away from the massive madness of Facebook, businesses can actually gain much by using Twitter cleverly as a marketing platform.

Promoted Tweets are simply regular Tweets that an advertiser pays to display to people who are not already following them on Twitter. Like regular Tweets, they can be Retweeted, liked, and so on. They offer a wonderful chance to extend the reach of great content that is already performing well on Twitter or other social channels.

Promoted Tweets appear directly in targeted users’ timelines, at the top of search results, and in the Twitter mobile app.

Promoted Accounts allow you to get your Twitter account in front of targeted Twitter users to gain relevant followers. A 2016 customer insight study showed that 85 percent of people believe Promoted Accounts help them discover new businesses on Twitter.

Promoted Accounts are displayed directly in potential followers’ timelines, as well as in the Who to Follow suggestions and search results.

Trending topics on Twitter are the most talked about subjects on the social network, appearing on the left side of the page, on the Discover tab, and on the Twitter app. Promoted Trends allow you to promote a hashtag at the top of that list.

When Twitter users click on your Promoted Trend, they see an organic list of search results for the topic, with a Promoted Tweet from you at the top of the list. As people pick up on your hashtag and start using it themselves, you can gain additional organic exposure that increases the reach of your campaign.

Here are some of the best practices that businesses must use to optimize their Twitter presence:

1. Follow Industry & non-Industry influencers : While most businesses do follow the influencers that are within their industry, it is important to also engage with other influencers.

2. Tweet Regularly : Apart from just business related tweets, sometimes it is important to simply tweet about the weather. It just adds a human element to all this technology.

3. Use hashtags : Create new hashtags or simply use trending hashtags to be part of the conversation.

4. Images & Videos : A picture (or video) speaks a thousand words. Use more of them.

5. Retweet & favourite your follower’s tweets : This will endear the follower and also bring the company aura down to earth, which is needed for follower engagement. 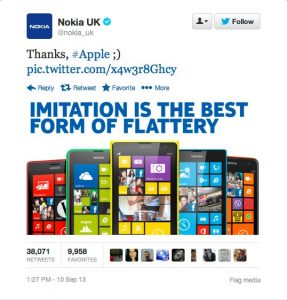 Finally, here’s something to learn from the most retweeted brand tweet ever: Nokia phones have been available in a range of vibrant colours for some time. So when Apple abandoned their well-known colourless product line and launched their iPhone 5C in a range of vibrant colours, we thanked them with a simple tweet at the exact moment of their announcement, hijacking #Apple worldwide. In 3 days, there were 40,467 retweets, stories on hundreds of blogs worldwide, and over 64 million impressions, making it the most retweeted brand tweet ever (doubling Oreo’s famous Superbowl tweet). Nokia’s fanbase increase by 18%, and Twitter said it was “one of the best moment marketing tweets ever”.

Twitter may have seen lows and highs since it’s inception, but the concept of status is not going anywhere. And amongst all the social media platforms, Twitter best represents it.