When Pfizer launched Viagra in 1998 its share price doubled within days. Since then, the little blue pills have become a pillar of profit, earning the company more than £1 billion a year.

Viagra is to Pfizer as iPhone is to Apple. But while you cannot make an iPhone at home, you surely have many things in your kitchen to make your own Viagra. Here is an exhaustive list of foods that are not only healthy but have well known aphrodisiac qualities.

Oysters have long been suspected as a love drug. Cleopatra and Casanova had one thing in common, they  loved oysters. Legend has it that Casanova ate dozens of oysters per day. The Venetian romancer reportedly once seduced a vestal virgin by seductively sliding an oyster from his mouth to hers. If that doesn’t get you in the mood, I don’t know what will! In fact, current research proves our suspicion. Oysters improves dopamine levels which boosts libido in men and women. Oysters are also high in zinc which is vital for testosterone production and healthy sperm. 1

Some experts have called watermelon the new Viagra. Bhimu Patil, researcher and director of the Fruit and Vegetable Improvement Center at Texas A&M University, stated eating watermelon delivers Viagra-like effects on blood vessels throughout the body and may increase libido!  This cool refreshing fruit contains citrulline amino acid. Citruline is good for the cardiovascular system and helps relax the blood vessels that increase sex drive.  If you want to get in the mood, make this Watermelon Sorbet and share it with your partner. I’m all about the easy and delicious recipes!

All chocolate comes from cacao beans. In its processed form it is known as cocoa. The Aztecs referred to cacao as nourishment of the Gods. Modern day foodies know raw cacao in its pure unadulteratedform is a superfood. It has more antioxidants than green tea or red wine. It also contains a stimulating chemical known as phenylethlamine, that  stimulates the sense of excitement and well being. The Journal of Sexual Medicine published a study that found, women who enjoyed a piece of chocolate every day had a more active sex life than those who didn’t. I get my daily dose of raw cocoa with my Raw Cocoa Coconut Fudge Recipe. I eat it every day, and it’s literally a five minute recipe.

Known for its suggestive shape, asparagus is high in a B vitamin known as folate that aids in increasing the production of histamine. Histamine is important for a healthy sex drive in men and women. The most delicious asparagus is just picked; it is so sweet! Grow your own or buy it fresh and organic at your local farmers market.

A recent report stated organic Sicilian avocados are taking Europe by storm. Apparently the Europeans can’t get enough of them. The ancient Aztec’s nickname for avocado was “ahuacatl,” or “testicle” because of the fruit’s shapely form. The Catholic Spanish priests found avocados so sexy, the forbade their parishioners to eat them.

Known by many as Peru’s “natural Viagra,” apparently this root has been known throughout Peru’s history as a sex-enhancing food prized by the Inca. According to Discovery Health’s medicine hunter Chris Kilham, the maca plant is used by the Peruvian culture to increase strength, stamina, energy, fertility, and libido. Wow, this sounds like a winning combination! Maybe I’ll start adding it to my morning smoothies.

Like oysters, pumpkin seeds are high in zinc, which is essential for healthy sperm production and preventing testosterone deficiency in men. They are also loaded with libido vitamins and minerals like vitamin B, E, C, D, K, and minerals including calcium, potassium, niacin, and phosphorous. Next time Halloween comes around, now you know what to do with those left over pumpkin seeds–roast those babies!

You wouldn’t normally think of celery as a libido inducing food, but according to Judy Gaman, Dr. Walter Gaman, and Dr. Mark Anderson, authors of the book “Stay Young: Ten Proven Steps to Ultimate Health,” eating celery actually increases the pheromone levels in a man’s sweat, making them more attractive to women. But make sure that celery is organic! Non-Organic Celery is Packed with dozens of pesticides. You don’t want those toxic chemicals messing with your libido, now do you?

The stuff that makes chilis hot, capsaicin, can actually rev up your libido too. Have you ever noticed a natural high when eating chilis? Capsaicin promotes the release of chemicals that can raise your heart rate and trigger the release of endorphins that give you a natural high, which pumps that libido! 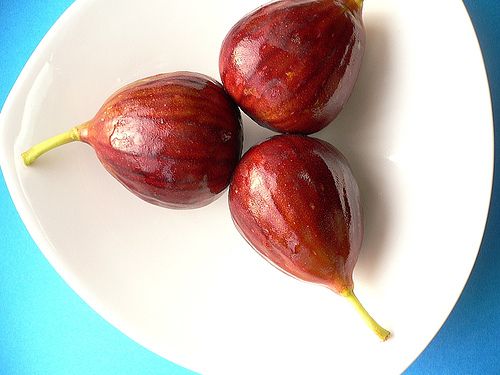 Legend has it figs were one of Cleopatra’s favorite foods. According to Dr. Nalini Chilkov, L.Ac., O.M.D, figs have been prized as a sensual food for their resemblance of the female sex organs. The ancient Greeks valued figs more precious than gold and many cultures associated figs with fertility.

Raw garlic anyone? Eating raw garlic may make your partner turn the other way in bed, but  it can certainly stir up your sexual desire. The heat in garlic is what stirs up your libido. Garlic contains allicin, which is thought to increase blood flow to sexual organs. This trick doesn’t work overnight however, apparently you need to consume it for about a month to reap its rewards. If you can’t stand the raw garlic go for the capsules found at your local natural food market. 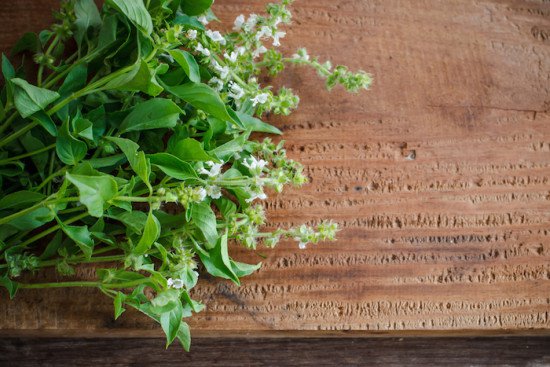 The scent of basil has long been associated with arousal. Women used to rub basil powder and oil on their skin to attract men. It boosts circulation and protects the heart, qualities necessary to charge up the libido! And, don’t worry, you don’t have to bathe in the stuff to reap the rewards – simply garnish a meal shared with a loved one with fresh basil and let the aroma do the talking. The culinary uses are plenty! 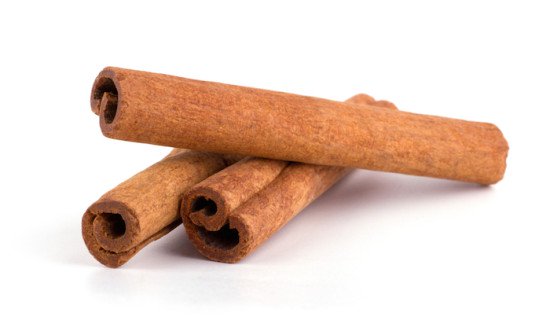 Cinnamon is considered to be one of the most effective natural aphrodisiacs. It heats the body, increasing appetite, both physical and sexual. Cinnamon oil has also been shown to improve cognitive function, so you can stay more focused on and attentive to your loved one. Sprinkle cinnamon in your coffee, yogurt, or milk, or use the spice to zest up baked desserts, such as muffins, cupcakes, cakes, and cookies. 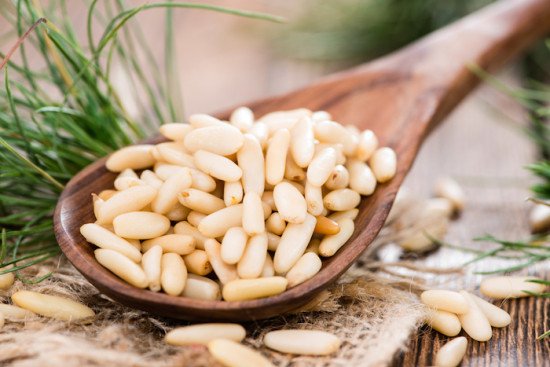 Since Medieval times, people have been consuming pine nuts to stimulate the libido. They are high in zinc, which has been shown to contribute to sexual competency among males by boosting testosterone levels in the body. The best and easiest way to incorporate pine nuts into the diet is to toss them into a salad, like this Organic Winter Salad with Pears, Pine Nuts and Ricotta. 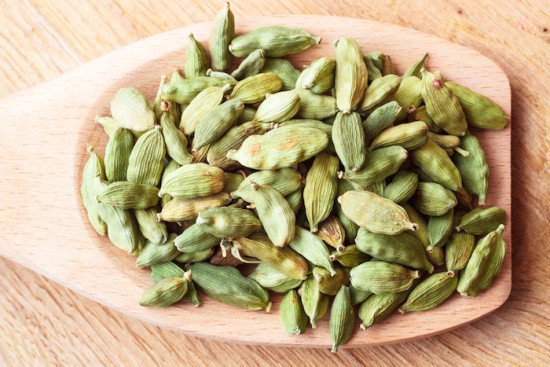 Regarded as a potent spice for treating impotence, cardamom has long been deemed a powerful aphrodisiac. Cardamom contains high concentrations of the compound 1,8-cineole, which increases blood flow and releases muscular tension. Its aroma is equally as stimulating and piques the senses. Try out this Pickled Fall Fruits with Cardamom and Cloves recipe for a unique way to introduce the spice into your diet. 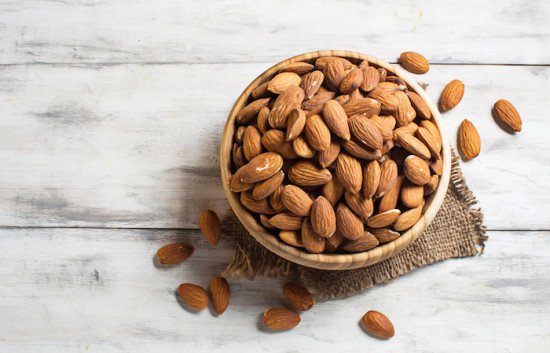 Get your spoons ready – discreet dips into the almond butter jar take on a whole new meaning! Almonds have long stood as a symbol of fertility, and scientists are now bringing more fodder to the myth. Almonds are rich in selenium and zinc, both essential for reproductive health. The omega-3 fatty acids in almonds also boost blood circulation and get the juices flowing! 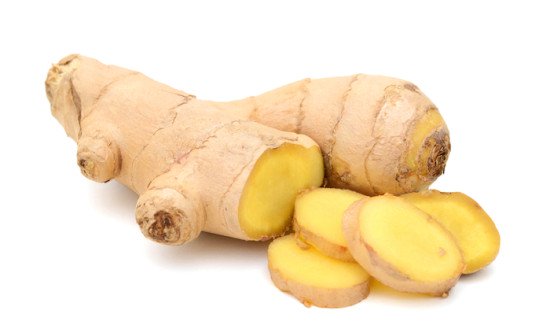 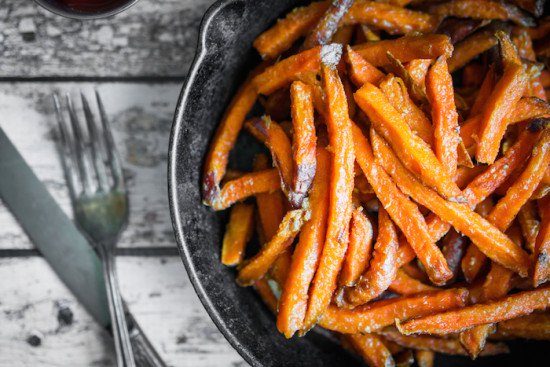 Sweet potatoes are rich in potassium, which combats high blood pressure, a condition that is associated with a higher risk of erectile dysfunction. Sweet potatoes are also rich in beta-carotene, providing the body with plenty of vitamin A, which boosts fertility by promoting better cervical fluid. The internet is no stranger to sweet potato recipes, but perhaps the best and most straightforward way to enjoy sweet potatoes is as French fries! 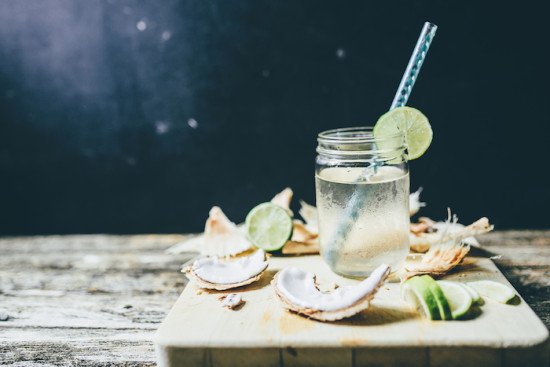 The water derived from coconuts contains the same level of electrolytes as your blood. Because of this, it improves blood flow, and thus, may serve as an aphrodisiac. Drink coconut water straight or add it to your smoothies for a libido kick. 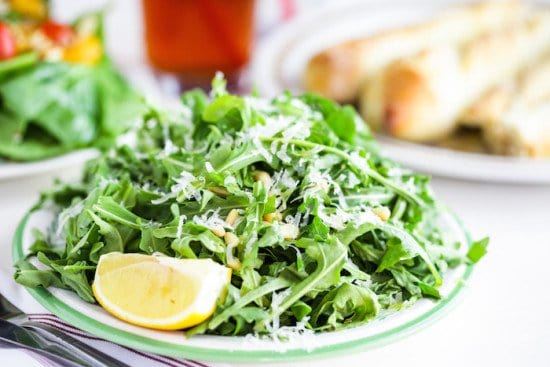 Praised for its libido-boosting properties since the first century AD, the pepper, bitter, leafy green vegetable arugula nearly graduated to “fertility god” status among Ancient Romans. Arugula is chock-full of vitamins and minerals and it fits gracefully into your salads, smoothies, and soups. 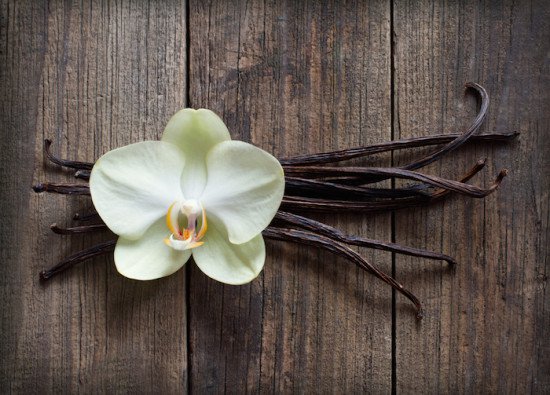 As early as the 18th century, vanilla was prescribed doctors as a way to increase male potency. In a survey conducted by The Smell and Taste Treatment and Research Foundation, vanilla was rated as euphoric and sensual by men themselves. Take notes, girls. Make your own vanilla and get the ingredient involved in both your beauty and culinary routine (beyond baked goods, that is). 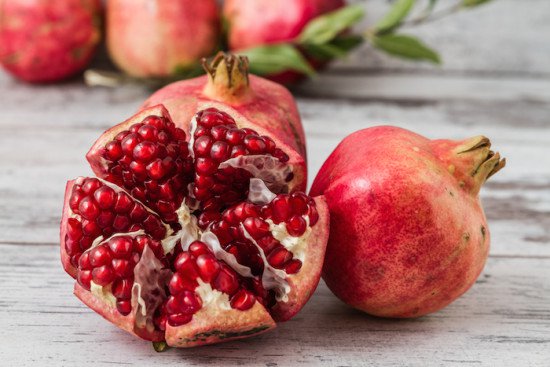 According to a study conducted by Queen Margaret University in Edinburgh, pomegranate juice is a potent natural aphrodisiac due to its ability to increase testosterone levels. Testosterone is a hormone that stimulates sexual appetite as well as improves the mood, reduces stress, and increases memory. Pomegranate can make way into your diet in a variety of ways, such as in a relish, quinoa salad, or cocktail!

If you want to seriously boost your libido, stock your pantry with these healthy, natural libido-boosting foods, and eat them on a regular basis. Who knows, you might even lose weight in the process by eating healthy foods, and the extra exercise you’re getting in the bedroom, can’t be all bad, either!

If all else fails in boosting your mood, think outside the box and consider getting a room at a hotel! A change of scenery and environment can do wonders for your sex drive. And remember, the brain is the most powerful sexual organ we have, so use your imagination wisely.

Dubai Celebrates the Final Season of Game of Thrones